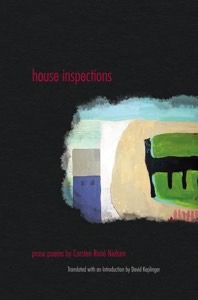 »Nielsen’s poems take us into a dream world where everyday objects take on new meaning […] The prose poem’s affinity for the surreal, however, should be celebrated, as should Nielsen’s skill at plumbing the strangeness of the human psyche. 'House Inspections' offers tantalizing mysteries for a world all too often gnawing on its own cynicism.«

The prose poems 'House Inspections' by Carsten René Nielsen was published as part of 'The Lannan Translation Selection Series' November 2011 by > BOA Editions in the United States.

Among the 43 prose poems in 'House Inspections' are these:

From the translator’s introduction

»Influenced by dadaism and surrealism, significantly Hans Arp and Benjamin Péret, Nielsen won early praise for his first collection in the 80s and by the late 90s was writing the prose poems that would gain him notoriety with critics. In House Inspections you find the terrain of Nielsen’s neighborhood in Aarhus, the second largest city in Denmark, chartered carefully by an artist at the height of his powers. More broadly speaking, this is any Danish neighborhood: the theater, the bar, the cheese shop, the bus stop, the dark houses and the blue glow of their televisions are the featured players of this “home movie,” transforming the familiar landscape into the strange and extraordinary, as if it were a moonscape cooked up by the early filmmaker Georges Méliès. […] Nielsen perceives language and form as toys whose interplay is intended only to incite delight, surprise, a little horror, and most of all wonder.«