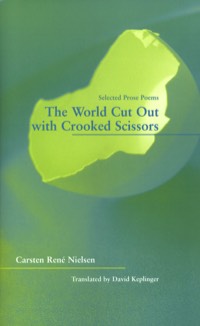 »Carsten René Nielsen has reinvented the prose poem as a revelation in a paragraph. His world, skillfully Englished by translator David Keplinger, is full of surprising creatures and equally surprising emotions. Nielsen is a master who deserves to be better known outside his native Denmark.«

THE WORLD CUT OUT WITH CROOKED SCISSORS

'The World Cut Out with Crooked Scissors' – the selected prose poems by Carsten René Nielsen was published October 2007 by > New Issues Poetry & Prose in the United States.

Among the 84 prose poems in 'The World Cut Out with Crooked Scissors' are these:

From the translator’s introduction

»Born in 1966, Nielsen works as a full time writer in Aarhus, the second largest Danish city, an academic and cultural center located on the peninsula of Jutland. Aarhus is also the home of the Grauballe Man, a bog man 2000 years old and displayed year round at Moesgaard Museum in a wooded area south of the city. This man, his cut open throat, his fractured shin, his beard stubble, his skin—even his fingerprints—preserved by the tannins of the bog, though flattened by its tremendous weight, lies displayed under glass, a ghastly testament to our common tribal past. I find in Nielsen’s poems a similar spectacle—the little glass box of form, and, within, something old, nasty, fascinating, human. […] And I sense a little sleight of hand at work, too. A magician, dressed in that old fashioned getup, the poet flips the real into illusions; illusions into the real. What’s inside that closet? I ask myself. Is it the horrible? The beautiful? The closet must and does contain both possibilities. […] Nielsen is insatiable, the meta-poet of “The Poet” who aches “to put it another way.” He distracts us with references to science and history, art, or with personal memories. It’s a wonderful show. Here is a magician who can disassemble worlds: using just that magic wand, that cape, that good saw.«